Turns out Julia Child, the sweetest old lady I never actually met, was a freaking spy for the U.S. during World War II! That’s right, the lady that had the cooking show on PBS that used to come on after all of my favorite shows. Now when I screamed this exciting piece of news to my mother at the top of my lungs, she looked at me and said, “You knew that already! We learned that at the…” And then she launched into recounting our visit to the Julia Child exhibit at the Smithsonian American History museum a million years ago. Yes, we went to that. But I didn’t remember, so I’m still fired up.

According to the AP, there were 24,000 spies that made up the Office of Strategic Services–an early version of the CIA. And Julia wasn’t the only well known person on the list. Supreme Court Justice Arthur Goldberg, Chicago White Sox catcher Moe Berg, Teddy Roosevelt’s sons, the drummer for The Police’s dad (fact). There are others. And the records are being released today.

They were soldiers, actors, historians, lawyers, athletes, professors, reporters. But for several years during World War II, they were known simply as the OSS. They studied military plans, created propaganda, infiltrated enemy ranks and stirred resistance among foreign troops.

Heaven’s to Betsy! I don’t know if I should picture Julia as Bond infiltrating enemy ranks, or more like a Bond Girl baking poison pies for the Nazis. Haha. “Child, Julia Child. Shaken, not stirred, dear. That’s right. Now you add just a pinch of ginger and dress it with some freshly peeled lemon rind. Oh delicious!” If you’ve never heard her voice, I recommend YouTubing her right now. It sounds like Robin Williams doing Mrs. Doubtfire. Anyway, I bet she was more like a Jason Bourne. Rawr.

Whatever her role was, I’m extremely impressed. She did a lot with her life. And maybe all her spy training explains why she was so good with knives in the kitchen. Oh man, if J.C. was still alive, there would be no need for that Rachel Ray chick. Girl, she could have kicked your ass–in and out of the kitchen. And, if anyone important is reading this, I’d love to be a spy. Hint. Hint.

I bet she could have used this as a weapon to take down an entire brigade of Nazis: 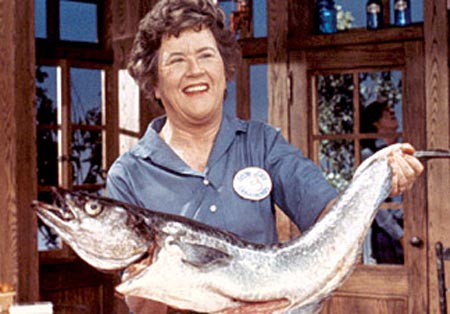