Mornin’, world! I’m waiting at my gate ready to head to Philly to stay with my favorite Korean correspondent and her family! While there, I will witness the baptizing of a few demons (yes, that’s right), drink at cheap bars in the suburbs, and eat way too much food. Guest Blogger SWTCTW Shan will be there for a bit, and if you’re lucky, we’ll work in a joint post among all the tomfoolery.

I just went through security, and things were fine — the line goes quickly when you’re, um, reading Texts from Last Night on your phone. But while waiting, I saw an interesting sign that was supposed to be recognizing one of the TSA guys for his hard work. The sign talked about how this guy speaks Turkish, German, and Italian fluently, and to that I say “IMPRESSIVE!” After that, the sign commended this guy for his security screening skills, which were exemplified when he spotted a loaded firearm in the x-ray machine. Now, that’s great. Really. I’d prefer to not have any loaded firearms on my flight. But isn’t that the most basic and essential aspect of his job? Shouldn’t we EXPECT the security dudes to be able to spot LOADED FIREARMS on the security belt? I’m not even a trained TSA official, and I think I might be able to catch that. It might be more commendable — and worthy of a sign — if, say, the employee had spotted two tiny containers of liquid that could be mixed together to blow up a plane. Or something.

I’ll catch you on the East Coast, yippee!

My family and I saw Up in the Air on Christmas day, and I love-love-loved it. It was funny but poignant, and everyone in it was phenomenal. (How is George Clooney STILL so god damned attractive?) The music in the film was also great, and this song is one of my favorites:

Sad Brad Smith, I dig you.

Another favorite — which prompted me to freeze as I was walking out and stand motionless listening to the song (while crying, of course) as the credits rolled — was submitted to Director Jason Reitman by a regular guy who’d just lost his job:

Unfortunately, neither of these songs will be eligible for the Oscar for Best Original Song for reasons described here, but kudos to Brad Smith, Kevin Renick, and Jason Reitman for their brilliant work.

dreaming of a white christmas, y’all.

Merry Christmas Eve to all of you celebrating! I’m pretty thrilled because it looks like it’s going to be a white Christmas here in Colorado, and I can’t remember the last time we got so lucky. I hope your Christmas Eves are full of family, friends, and Patron, like mine will be! A few videos to celebrate…

Because this makes me laugh:

And for all of you with some snow this year, and because Otis Redding is the shiznat:

Definitely DO NOT think about the fact that Susan Sarandon and Tim Robbins broke up. Get it out of your head. It’s not real. Reese and Ryan and Brad and Jen will eventually get back together too.

Have a good one, kids! 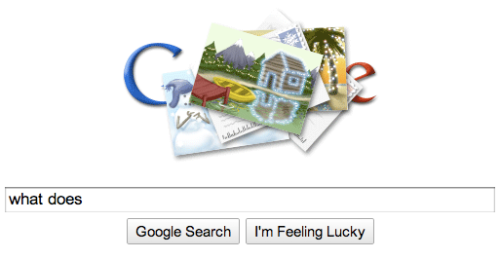 What I was Googling: what does (for more Google predictor fun, of course)

do babies poop in the womb?

My sister and I were watching this show about multiples on TLC, and as we were watching, she turned to me and asked, “Do babies cry in the womb?” And…I didn’t know. I mean, I don’t know anything about babies! Maybe they cry and we can’t hear them because it’s muffled by the womb? Maybe this is a totally stupid question?

Obviously, to try to figure out the answer to this burning question, we Googled it. But first, we let “do babies” sit there in the search box so we could see what the average person asks about babies. And oh dear god, I haven’t laughed this hard in a while: 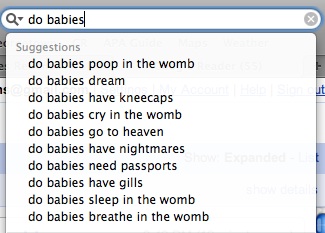 I can’t even pick my favorite. Are there REALLY that many people out there wondering if babies have kneecaps?! (And as funny as I find these questions, I can’t definitively answer many of them…)

UPDATE: Babies DO cry in the womb! (This is from a website called BabyCenter, and it seems legit):

Yup. MSNBC did a cool medical in depth a few years ago on what a fetus does while gestating. All of the doctors in the study agreed that there is ultrasound proof of late term fetus “crying” as a result of being startled. Of course there is no sound (as noise is produced by air moving across the vocal chords), but what they are doing is crying, complete with gulps and chin quivering. Pretty damn cool.

anyone need a last-minute holiday gift?

Folks, I’m not just here to regale you with tales of my own awkwardness; I’m here to help YOU. In the spirit of the season, I want to share with you what I think is the perfect holiday gift for anyone still left on your list. I present the Ed Hardy Hair Dryer:

C’mon, can you think of a better way to start your morning than blow-drying your freshly gelled locks with this beauty? I didn’t think so. And at the sale price of $99.95 (!!!), how can you resist? 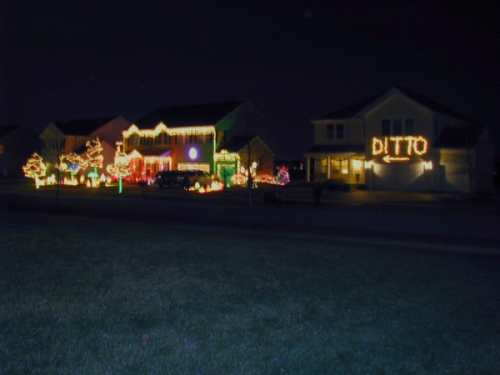 Happy Holidays from the SWTCTW family!!

six words to change the world.
Create a free website or blog at WordPress.com.