kanye west is short and mean. 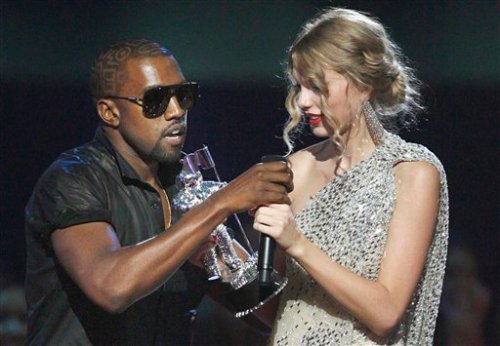 I have a proposal. Let’s find an island, and we can put the following people on it and leave them there until the end of time: Heidi, Spencer, and Stephanie Pratt, Nicholas Cage, Ann Coulter, and Kanye West.

I doubt I’m breaking this news to anyone, but last night at MTV’s VMAs, Kanye West proved once and for all that he is a raging douchebag. My roommate and I watched the beginning of the VMAs last night, and I was feeling good about them. I actually felt some sympathy for Michael Jackson and enjoyed the tribute to him (slightly making up for my previous apathy), and Taylor Swift managed to win the award for Best Female Video, even though the rooms and I were sure it would be Lady Gaga or Beyonce. T. Swift was adorable and gracious accepting her award, and then Kanye West ruined it by coming onstage, taking the microphone out of her hands, and saying “Taylor, I’m really happy for you, and I’m gonna let you finish, but Beyoncé had one of the best videos of all time.”

And it was awkward. Rull rull awkward. T. Swift just stood there, Beyonce looked mortified, and MTV awkwardly cut to one of the awkward skits with Eminem and Tracy Morgan. AWKWARD AWKWARD AWKWARD.

It’s no secret that I love me some Taylor Swift, but no matter what you think of her, you’ve got to admit: that was pretty lame of Kanye. MTV allegedly asked him to leave, and he was booed anytime his name was mentioned later in the night. The bootylicious Beyonce saved the day, though, when she won the Video of the Year award and invited T. Swift back onstage to have her moment. As Fox News (look! I sometimes read things besides the NYT) puts it:

Beyonce’s hit “Single Ladies” eventually got all it deserved by taking on the big one – Video of the Year. The ever-classy Knowles dedicated her time to Swift and had the emotional teen idol return to the stage for the opportunity to give her acceptance without any interruption.

Moral of the story: everybody hates Kanye West and everyone loves Beyonce and Taylor Swift even more than they did before.

UPDATE: Okay, I have a few more thoughts after reading this Daily Beast article in which Choire Sicha tries to defend Kanye. (He also tries to make the Kanye/Taylor incident a race issue, which seems to me to be a blatant attempt to create some controversy. This was so not a race thing.) But Sicha’s article did make me think (I can’t type a sentence like that without feeling like Carrie Bradshaw, ha). I started to think that we as a pop-culture-loving society are being a leetle ridiculous getting so riled up about this. And maybe that’s true to some extent. Maybe the magnitude of the world’s reaction to Kanye’s rudeness is somewhat over-the-top, but I think the overall sentiment is valid. Taylor Swift is a rare star who seems genuine, hardworking, focused on her fans, and generally wholesome and kind. You have to admit that she’s made herself wildly successful and is a talented and savvy businesswoman, even if you don’t agree that she’s a talented artist. And so it’s impressive when MTV fans — who traditionally support some pretty superficial stuff — voted for a heartfelt 19-year-old country singer who doesn’t drink. It was an exciting break from tradition, and based on the reactions on the Interwebs, most people were genuinely happy for Ms. Swift. In the end, this was about a person who got something they deserved and was embarrassed by a drunken asshole. Kanye was rude, plain and simple, and I’m glad people reacted the way they did. Yes, there are bigger problems in the world, and yes, T. Swift is a big girl and a multimillionaire and will be fine, but it’s nice to see pop culture consumers of the world emphatically come down on the side of the nice girl.

In other unsurprising VMA news, everyone is obsessed with Twlight, Beyonce’s performance was out-of-control amazing, Lil Mama had a surprise of her own for Beyonce’s boo, and  Lady Gaga is still a wackjob: 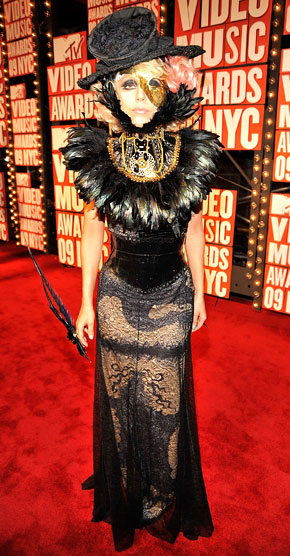