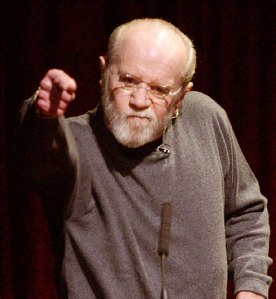 Stand up comedian George Carlin died yesterday, and to honor him, the New York Times (which I absolutely love, but I’m more of a WashPo reader) wrote an obituary with a word in the headline that nobody understood. SPLENETIC.

How do I know that nobody understood it? It was number 8 on the list of most googled searches this morning.

Now, we all love to sporadically throw out a surfeit of SAT words to show our intellectual prowess and evoke minatory feelings of inadequacy among our peers. HA! Look those up! (That sentence took me nearly ten minutes write. Worth it? I think so.)

But come on, NYT, this is George Carlin we’re talking about. George Carlin, who is known for his completely down to earth standup about drugs and bad words. His “Seven Words You Can Never Say on Television” was about anything but SAT words. One of the words, by the way, is cunt–John McCain knows that one!

Anyway, I think it was wrong of the NYT to use an elitist word in the headline. And so did they–they changed it to ‘irreverent’.

RIP George Carlin, you said some funny things and were awesome in Bill and Ted’s Excellent Adventure!