Finally, it’s official!  Hillary Clinton is Barack Obama’s nominee for Secretary of State!  Technically we all “knew” this weeks ago but the journalism major in me couldn’t write about this until it was the real deal.

This is pretty awesome.  First of all, because Hillary is awesome.  Maybe she’s a little coarse but she’s also intelligent, visionary and deeply devoted to serving this country.  Plus, she’s BFF with Madeleine Albright, my idol and all-time favorite person ever.  So, if Hillary ever needs some extra advice she has one of the greatest Secretaries of State in her speed dial.

Speaking of which, here they are, my two favorite Secretaries of State: 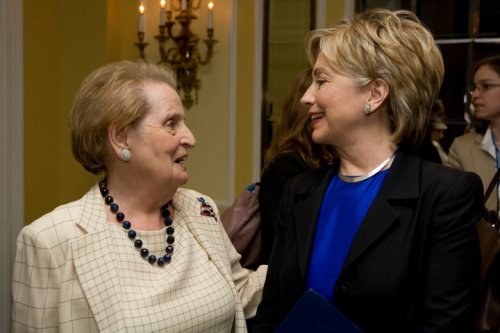 As this is, sadly, not a video you can’t tell that here Madeleine Albright is actually saying “you know, I think we should offer that delightful guest-blogger, Madeline, a job.”  And Hillary is saying “That is a wonderful idea!  I will call her right away.”

Despite the fact that Hillary was the United States’ foremost ambassador during her years in the White House, visiting 60 countries with the mission of promoting American values and policy abroad (hmmm that sounds kind of like what the Secretary of State does . . .), there have been some distubing reactions to her nomination.  According to a Reuter’s article titled “Women see Clinton job as triumph, disappointment,” some women are still pissed that Hillary’s not the prez.  Do I think she would have made a great president?  Absolutely.  BUT LET’S MOVE ON (Hillary has).

Most disturbing was this quote from Carol Jenkins, president of the Women’s Media Center in New York:

“Secretary of State has become the women’s spot — a safe expected place for women to be. In the ideal world, we’d see woman as Treasury secretary and throughout these ranks (of government).”

HOLD UP.  Now that three of the U.S.’s 67 (including Hillary) Secretaries of State have been women it’s a woman’s spot?  I was a liberal arts major so I could be wrong but I think that math’s a little fuzzy.  And hey, LADY!  You’re the president of the Women’s Media Center so what’s with the bad press?  Secretary of State is the highest cabinet position and fourth in the line of presidential succession.  Why are we insulting the position at all, let alone now that a woman is about to be in charge?  Seeing more women throughout government would be great but we’ll get there; and in the meantime let’s not insult those who are not only filling these positions but working to improve women’s rights around the world.

And you know what?  If Secretary of State has become “the women’s spot” it’s for one reason and one reason only: bitches get stuff done.

One response to “madam secretary: bitches get stuff done.”