santa claus is coming to town! 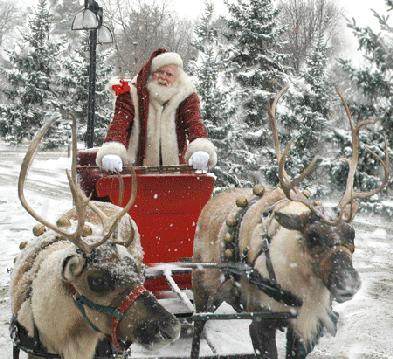 I’ve never had any trouble believing in Santa but for the Scrooges out there Larry Silverberg, a professor of mechanical and aerospace engineering at North Carolina State University, has conducted some research to further explain Santa’s magic.  His Christmas-spirit-lacking conclusion?  Advanced nanotechnology and an exploitation of the time space continuum help to explain some of Santa’s powers.

“He understands that space stretches, he understands that you can stretch time, compress space and therefore he can, in a sense, actually have six Santa months to deliver the presents,” Silverberg told Reuters.

I suppose that makes it a little easier to believe (that is, if you didn’t already) that Santa can visit 200 million homes in just one night.  Silverberg said his research also indicates that Santa doesn’t carry all of the toys in his sleigh.  Instead, he grows the presents under the tree using nanotechnology or, more specifically, he turns irreversible therm0-dynamic properties into reversible ones to turn soot, candy and other natural materials into the presents.  Maybe that’s why we’re supposed to leave cookies for Santa.  Not because he’s so hungry (although now that we know it actually takes him six months the cookies make a little more sense) but because he uses them to grow our presents!

Some of Silverberg’s other research on Santa indicates that to determine whose naughty or nice, Santa uses giant antennas; the sleigh also has a GPS system of sorts and the reindeer are “genetically bred to fly, balance on rooftops and see in the dark.”

I still think Santa’s sleigh is fueled by Christmas Spirit and my biggest question remains, how does Santa eat all of those cookies and still fit through the chimneys?  Also, where does he vacation after Christmas?  I’d like to go there and buy him a drink.

If you’re still not convinced (you lousy non-believer, you) check out this picture from Iwasabducted.com  (a truly reliable source if ever there was one) of an unidentified flying object that looks eerily similar to Santa’s sleigh.

Honestly, do you need more proof than that?

4 responses to “santa claus is coming to town!”