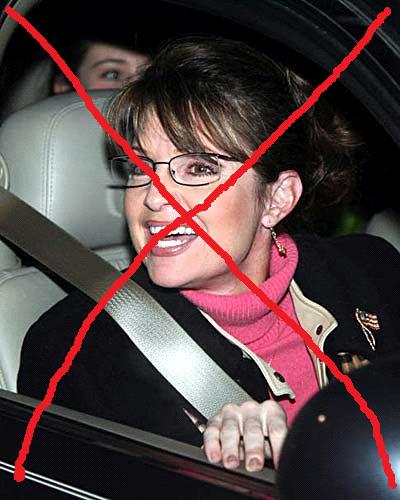 It’s summertime, and she’s not actively running for national office anymore (*crosses fingers*), but Sarah Palin still makes me want to put on a flannel nightgown and eat Smartfood as I fume and read various articles about her increasing level of crazy. (You remember my flannel nightgown theory, right?)

I actually have work to do right now, and I actually want to do it, but I have to post something about her. We all know that she’s stepping down as Governor of Alaska, which is mind-boggling in and of itself, and we’re all hoping that she’s not doing this because she’s aiming for a 2012 Presidential run. And all of that makes me a little nervous/angry/delighted by the ridiculousness, but her resignation speech is truly a work of art. I’m sitting here with my officemate and we’re each reading lines to each other and trying not to break our computers. I’m too riled up, and not quite patient or clever or smart enough to break this gem down on my own, but thank goodness, Jezebel did for us! Do yourself a favor and read the whole thing, but for now, here are some of my favorite points of analysis:

Palin says: “So to serve the state is a humbling responsibility, because I know in my soul that Alaska is of such import, for America’s security, in our very volatile world. And you know me by now, I promised even four years ago to show MY independence… no more conventional ‘politics as usual.'”

Jezebel says: “Here Palin appears to be opting for a broad definition of ‘politics as usual,’ one that includes such outdated conventions as finishing out one’s elected term and completing the job one has promised to do.”

Palin says: “And then I thought – that’s what’s wrong – many just accept that lame duck status, hit the road, draw the paycheck, and ‘milk it.’ I’m not putting Alaska through that – I promised efficiencies and effectiveness!? That’s not how I am wired. I am not wired to operate under the same old ‘politics as usual.’ I promised that four years ago – and I meant it.”

Jezebel says: “Here Palin advances her bold thesis: that serving out the full term for which your constituents elected you is in fact an exploitation of those constituents. No doubt her time after resignation will consist entirely of delivering barrels of crude oil to impoverished Alaskan families and reuniting baby grizzlies with their mothers, and not of ‘hitting the road’ making public appearances in other, more influential states.”

Palin says: “Let me go back to a comfortable analogy for me – sports… basketball. I use it because you’re naïve if you don’t see the national full-court press picking away right now: A good point guard drives through a full court press, protecting the ball, keeping her eye on the basket… and she knows exactly when to pass the ball so that the team can WIN.”

Jezebel says: “A more appropriate analogy for Palin’s actions might be stopping in the middle of the game, tossing the basketball over one’s shoulder, and then leaving the court to play an entirely different game, perhaps table tennis or curling.”

Deep breaths. I have gotten to the point where I seriously cannot respect anyone who respects her. (Doobie, you’re exempt. I know you just want her to be your Sugar Mama.) This speech is not just absent of any sort of political strategy that I can agree with, it’s absent of logic. IT MAKES NO SENSE. Does she not have speechwriters anymore? Who lets her get away with saying this shit out loud? Please, please, please let this just mean a scandal is about to be revealed and it will be the end of Sarah Palin as we know it. My fragile, anxious self can’t take any more of her, and I don’t think I’m supposed to wear a flannel nightgown to work.

UPDATE: Also, read this. Ain’t nobody in history like you, Sarah.