odds and ends for sunday afternoon.

Greetings, earthlings.  After the most exciting Saturday night ever (I ate half a block of cheese, apple slices, 3 pickles, a piece of pizza, BBQ chips, and a bowl of chili.  Don’t act like you’re not impressed.), I find myself slothing on the couch of fellow blogger Mal and dear friend Ms. Potter.  Naturally, I have been catching up on all the interesting news that I missed whilst stuffing my face with high sodium foods.  Here we go:

*Michael Phelps smoked a bong, oh my!  AND THERE IS PHOTOGRAPHIC EVIDENCE!  I’m not surprised.  He swims fast but in his spare time, he likes to move slooooooooooow.  Here’s the best quote from the story:

“He looked just as natural with a bong in his hands as he does swimming in the pool. He was the gold medal winner of bong hits. Michael ended up getting a little paranoid, though, because before too long he looked like he was nervous and ran out of the place.”

Haha.  Five bucks the kid who said this quote was stoned out of his mind and giggled for hours after saying “the gold medal winner of bong hits”.  Here’s the picture. 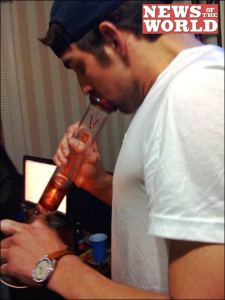 Whoopsies!  But in all honesty, this guy takes six drug tests a day, I hardly think he’s a pothead.

*Lisa Loeb got mawwwwwwwied!  She married Roey Hershkovitz, a teevee producer.  You can read the cute NYT announcement here.  Oddly enough, there’s no mention of her E! show, “#1 Single”, which chronicled her miserable dating life and her never-ending, desperate quest to get married.  Funny they didn’t mention it.  Eek.  Here’s a video of her actual number one single, “Stay”.  LOVE THAT SONG.  It’s so 7th grade angsty.  But congrats to LL and her man!

* If you watched the inauguration, you saw Aretha Franklin and her [insert adjective of choice] hat.  Her hat is historic enough on its own, apparently, because the Smithsonian Museum has requested it.

“I am considering it. It would be hard to part with my chapeau since it was such a crowning moment in history,” says the Queen of Soul. “I would like to smile every time I look back at it and remember what a great moment it was in American and African-American history. Ten cheers for President Obama.”

And then she went on about being a natural woman and all that jazz.  What do you think about her hat? 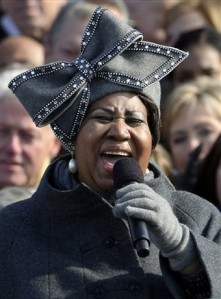