Tag Archives: the game of clue

It is the end of an era.  Really, it is.  Total Request Live, MTV’s show aimed at the 12-15 crowd (so that means you start watching when you’re 10, and stop when you’re 14…and occasionally turn it on when you’re 16 or 17…just because it’s on) is ending it’s 10 year run in November. WAHHHHHHH.  I feel my post-college depression kicking in yet again.  And like last time, when they changed the game of Clue, Cheez-Its will soothe my pain.

So what are we really losing?  Here is how TRL is described on the MTV Web site:

At TRL, we bring you the latest, greatest music videos, bangin’ live performances and the hottest celebs. First, we combine your online votes, with the top songs and artists from all the places you go for music — mtv.com, downloads, music charts, ringtones, radio and more — to create the hottest, most all-inclusive music countdown.

Wowie, this is serious.  This show is important. People are enfranchised, there are great music videos, hot celebs, and of course we can’t forget the banging’ live performances.  And an opportunity for girls to act like this when the Jonas Brothers come to town.  Okay, I just love this picture and want to use it all the time. 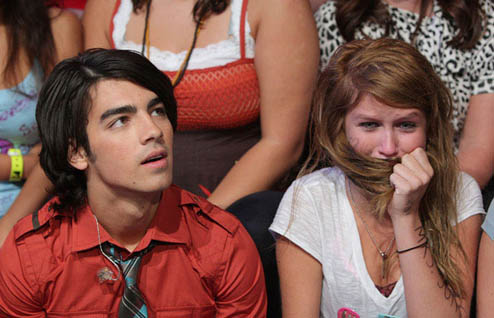 Here’s the thing–I haven’t watched TRL since the Backstreet Boys (sigh. Why are you such a screw up, Nick Carter? We were supposed to get mawwwied!) but I’m still kind of sad.  And Carson Daly hasn’t been on the show mimicking not only the clothing style of whoever his guest was, but also the verbal style, since 2003.  Now I’m all sappy and reminiscing.  Remember when Carson dated Tara Reid?!

I’m just sad that future generations won’t be able to talk about TRL the way my friends and I can.  It’s sort of like when we talk about how good MTV’s Undressed was, my brother has no clue what we’re talking about.  At least I hope he doesn’t.  That show was wayyy inappropriate for him at the time.  Me too, I guess.

Anyway, I leave you with a music video, circa 2000, that is the only proper way to end this post and bid farewell to TRL:

changing the game of clue: whodunnit?!

Due to my post-college depression, I don’t like change. Except when it comes with a healthy dose of hope and a large helping of Barack Obama. Haha. But you know what I mean. I feel myself especially threatened emotionally when staples from my younger years are changed. When I learned that Hasbro is totally changing the game of Clue, I immediately found myself drowning my sorrows in a box of Cheez-Its while whining “I’m so olddddddd” to my poor dog. I not crazy, I swear.

Clue is very near and dear to my heart! It was one of the few board games that I could actually win as a child. Monopoly taught me at a young age that I was miserable at math and business, but Clue, ah Clue– Clue made me feel as if I could one day work for the C.I.A. I was just THAT GOOD at finding out who killed Mr. Boddy in what room with what weapon.

According to the AP, the new Clue is updated to fit in with “tabloid culture”. I love me some tabloids, but geeez louise, keep it out of my board games.

The six characters’ last names remain the same, but their first names and bios have been updated. For example, Miss Scarlet is now Kasandra Scarlet, a famous actress often featured in tabloids. And Mr. Green is now Jacob Green, an African-American “with all the ins.”

HAHA oh man. “With all the ins”. What does that possibly mean? Hmmm. I wonder if he makes his final accusations in ebonics? One of my favorites, Colonel Mustard is now Jack Mustard, an ex-football player. Professor Plum is now a video game designer. I’m not making that up. How are we supposed to feel smart playing this game if our characters have gotten dumber?! And here is the greatest part of all, each character now has a special power to help them solve clues. LIke superhero powers? WHAT ABOUT MY SHARP AND NIMBLE MIND?! Ahh this is too much to handle. But wait, there’s more. No more revolver, lead pipe or wrench–instead we have a dumbbell, trophy or poison. Poison? Ehh, alright. Giving us Chuck Norris’ right leg would have been more practical than a dumbbell. Now there’s a weapon.

Clue has even gotten nouveau riche on us. There’s now a spa, theater and a guest house. Mr. Boddy’s classy, beautiful mansion wasn’t good enough. They made it a McMansion!

They are taking the original Clue off the shelves this fall. Go get it now, or forever be burdened with this travesty.

RIP Colonel Mustard. You will be missed. Here he is, in all his glory.

I can think of only one positive thing to say about this whole ordeal. Perhaps with this new version Miss Scarlett will finally be the slootbag we all knew she was/wanted her to be. Perhaps.