serena is on venus’ planet again. 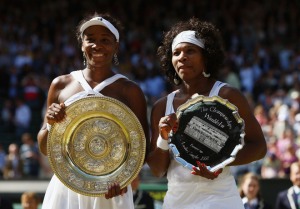 For those of you that have siblings, you know that there’s always a little competition. My brother and I compete on many levels, but it’s usually games like body spray wars (everyone loses because you smell disgusting) and who can tell the most outrageous stories (okay, he wins). Nothing we do or ever will do can come close to the competition between Venus and Serena Williams.

Today, Venus beat Serena in the singles finals at Wimbledon. That means they are number 1 and 2 in the world. Awesome. It is Venus’ fifth Wimbledon championship, but Serena has won two. These girls are wild. On top of being remarkable athletes, they both have degrees in fashion design. Williams sisters: 2. Kathleen: 0. Eeek.

Here is something I found to be interesting. Their mother, Oracene, was there to watch them play but their father, Richard, went home because he can’t handle seeing his daughters play each other. Um, okay. But if you’re going to raise the top two tennis players in the world, you should be used to it by now. Right? That just seemed a little strange to me.

On a side note, does anybody remember the movie Wimbledon? The very thought that a movie, starring Kirsten Dunst of all people, was about tennis and had her eventually winning Wimbledon is laughable. The movie was terrible, but upon some research, I learned that James McAvoy was in it! He’s everywhere (to me)! Let’s see how many posts I can reference him in before it gets too old.

McAvoy (rawr!) aside, I was trying to figure out which Williams sister I like best. I think I’m going to go with Venus, because she’s the oldest. And as an older sister myself, I know you must keep the younger sibs in check. Like maybe beating them at Wimbledon, showing them up in a cheesecake eating competition, or seeing who can hold on to the remote control longest. 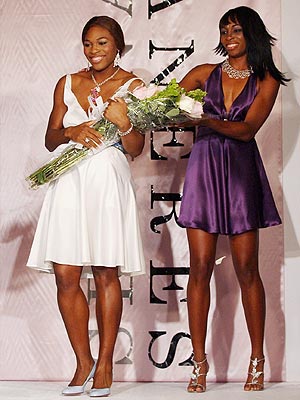 Kirsten Dunst, neither an athlete nor a fashionista:

One response to “serena is on venus’ planet again.”