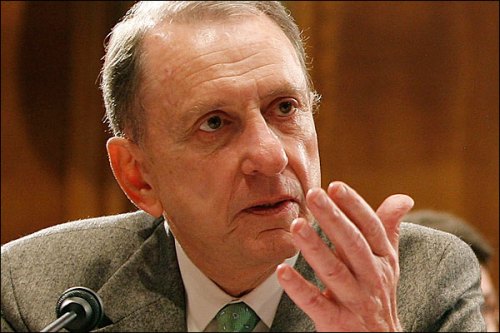 Republican Senator Arlen Specter, a well-known moderate, has announced he is joining the Democratic party and he will run as a Democrat in 2010.  This is not a huge surprise.  He has consistently voted with the Democrats since Obama has been elected.  Apparently though, our Veep, Mr. Biden is the one that convinced him.  Way to go, Joe!

Obviously as a Democrat, I am happy that we have one more crucial vote in the Senate.  (Now if they would just get that pesky Minnesota seat settled and swear in Al Franken…)  But let’s look at the larger picture here.

I always like to give credit where credit is due.  I am, after all, a first born child and I LOVE to be recognized when I’m right or when do a good job.  (Do you think they’ll give me gold star stickers for a job well done in the real world?)  The Republican party, over the past ten years, has done a fantastic job at messaging.  Ex- It didn’t matter that he wasn’t smart, America just needed a president you can sit down and have a beer with.  This, of course, turned out to be an EPIC FAIL.  But the American people bought it in 2000 and 2004.  Here’s another good one:  All Democrats are socialists who want to take away your guns and hard earned money, abort your babies and let the terrorists win while turning the US of A into a godless nation.  A slight exaggeration, but I can only hope that you get my point.

But while the GOP was painting moderate Democrats and the actual socialists with the same brush, they neglected the fact that their own party has its moderates.  And maybe, just maybe, the party’s message was excluding them.

It’s weird, but I think Meghan McCain is the most logical spokesperson the GOP has right now.  Naturally, I will disagree with her on some points, but at least she’s says things that make sense.  And if they are looking for the youth vote, I’m pretty sure MM will have a better chance at reaching out to young people then Rush Limbaugh.  Or that wretched Ann Coulter.  Ugh.

I don’t really feel like analyzing how the GOP can fix its problems when I think there are bigger problems to solve… like the economy.  I’ll let you know when I figure that one out.  In the mean time, my trust is in B.

But welcome to the real party, Sen. Specter.  Time to get down to business.  There’s work to be done.