Tag Archives: who is the worlds oldest man 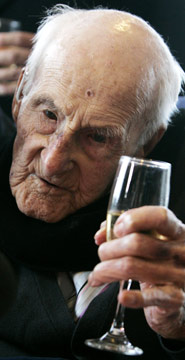 A month ago, I wrote about Henry Allingham, who celebrated his 113th birthday, and becoming the world’s oldest man, with a glass of champagne.  Henry died this morning at the age of 113.

He was Britain’s last surviving veteran of World War I, a preacher of peace and the author of a memoir.

Henry Allingham turned 113 earlier this month, clinching the Guinness World Records title of World’s Oldest Man.  The picture is of him on his 113th birthday, celebrating with a bit of the bubbly.  Mr. Allingham, who has lived in three centuries, is also one of two surviving veterans of  World War I left in the UK.  Click here to read about his amazing life.  I like this quote:

His experiences, and the sights he saw at the third Battle of Ypres, ensured that his youthful enthusiasm was replaced by an undying passion for peace. “War’s stupid,” he told the BBC. “Nobody wins. You might as well talk first, you have to talk last anyway.”

After finding out he was the World’s Oldest Man, his caretakers said he returned to bed after breakfast.

Awww.  When I’m that age, I’ll go back to bed after breakfast too.  While he is not the oldest person to ever live, he is surely something special.  Here’s to 114, Henry!  Cheers!