richard simmons: sweatin’ to the congress? 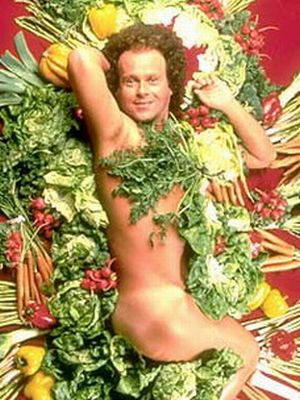 Here is a delightful thought for your Thursday afternoon! Fitness master and supreme god of the tacky workout videos Richard Simmons alluded to his dreams of someday being a member of the US Congress. He’s already at the Capitol–today he testified to the House Education and Labor Committee about childhood obesity. Here is what went down. This, of course, comes from CNN’s Political Ticker.

But you already have our respect RS! People don’t respect congressmen and women that much. In fact, they are the least liked branch of government! I bet more people watch your workout videos (god love them) than C-SPAN. Then, he cited Jesse Ventura as an example of celebrity-gone-politician. Just me, but if I was going to make a case for that, I don’t think I would use “The Body” as my example. Maybe Ronald Reagan? Whatev. He continued,

“After this congressional hearing, I will go home,” Simmons said, “I will talk with my Dalmatian dogs, I will pray to God and then I’ll see what else I can do to help.”

He would have dalmatians. And he would talk to them.

I personally think it would be kind of fun to have him in the House, as long as he’s right on with his policy and votes the way I want him to. Haha. I mean, this man has made millions of middle-aged people get off the couch and sweat to oldies, all while prancing around saying “I’m a pony! I’m a pony!” in short shorts. If elected, do you think he would wear a suit? The idea of Richard Simmons in anything other than shorts shorts just seems…unethical. That aside, just think of all the things he could inspire his fellow members of Congress to do! To prove how Richie can move mountains, I found a youtube video of his epic workout tapes, but somebody updated it and put it to the greatest song ever recorded–“Walk It Out” by DJ Unk. Haha. Anyway, enjoy. And in the great words of JFK, ask not what your country can do for you, but what Richard Simmons can do for your country.