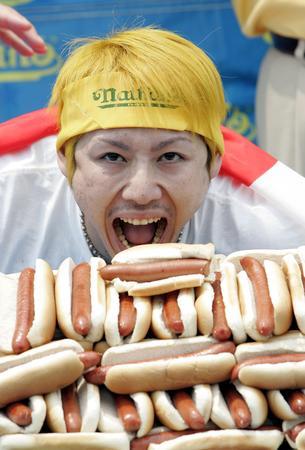 This just in from the Department Of Things That Are Unsurprising:  Ex-competitive speed eaters report weight gain, chest pain and clogged arteries.  Oh my!

CNN has a gripping piece on former competitive speed eaters.

“Any way you look at it, it’s not healthy,” Dave “Coondog” O’Karma, a retired competitive eater, said of his former hobby. “You do it once in a while, and it’s fun. I don’t think loading your body with fat and salt is healthy.”

After 35 years of gobbling hamburger, oysters, eggs, corn on the cob and even bull testicles, O’Karma listened to his family and retired from the competition.

Maybe his family was just upset that he gobbled bull testicles.  Moving on!

According to the article, the effects of speed eating hadn’t been tested before.  If I had to venture as to why, I think because everyone would know that it’s bad for you.  That’s common sense.  But someone just HAD to do a test on it.

n 2007, four University of Pennsylvania School of Medicine doctors who specialize in gastroenterology and radiology conducted an experiment on the stomach activities of a competitive eater and an average eater. The average eater ate seven hot dogs before he felt sick. Champion speed eater Tim Janus ate 36 hot dogs in 10 minutes before doctors intervened.

The doctors had to intervene!

that john denver’s full of shit.

On Friday, totally spur-of-the-moment, Kelsey and I decided to go meet up with some friends in the mountains for the Fourth. I’ve never spent a Fourth of July in the mountains, but I figured it would be a pretty wonderful way to celebrate America’s birthday. (Among the mountains that inspired “America the Beautiful,” no less.) Picture this: two ridiculously happy girls wearing ridiculously large sunglasses, riding top-down in a convertible blasting Paul Simon, driving west toward the mountains. So cliche, and so amazing.

We went to watch the fireworks at this large field/sports complex in Fraser (which is near Winter Park, for those of you non-Coloradans), and got to enjoy a live band and delicious brats and Coors Lights before freezing our asses off for about two hours. (Your mom was right: bring a coat. The mountains are ever so slightly colder than the city, and sundresses do not keep you particularly warm.) The freezing-our-asses-off part was worth it, though, because the fireworks show was amazing. Somehow we picked the best spot on the lawn, and the fireworks ended up being directly over our heads. Fabulous. I love how fireworks amaze and awe people from three to 93. We were a bunch of 21- and 22-year-old boys and girls (by technical standards, adults), and we were ooh-ing and aah-ing and screaming “WOW!” like a group of toddlers who had no idea what those lights up in the sky were. I love that.

If you haven’t noticed yet, I’m completely and totally obsessed with the state of Colorado. I’m not particularly outdoorsy, but I love that my state is, and I love living in a great city that’s only two hours away from some of the most amazing mountains in the world. It doesn’t get much better than that. You know that Baz Luhrmann song about sunscreen? Where he says “Live in New York City once, but leave before it makes you hard; live in Northern California once, but leave before it makes you soft”? To that, I’d add: Live in Colorado once. Period. You may never want to leave.

My camera drowned in a Blue Moon shower last weekend, so I didn’t take any photos while I was up in Fraser, but the area basically looks like this:

to baseball, beer, and barack obama.

Hey kids, tomorrow is America’s birthday! Toss a little Wild Turkey in your Coke and enjoy Fourth of July the patriotic way, by eating too much and drinking too much and generally being a little too loud.

And, dear readers, we apologize for our less-than-regular postings this week. Kathleen’s been otherwise occupied (down with Connecticut!), and I’ve been, uh, prematurely excited for the three-day weekend? We’ll be back in full force next week, armed with plenty of snark. Until then, cheers!

bikes, boobs and a hemp g-string. 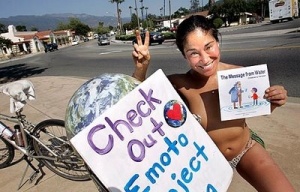 Oregonian (Oregonite? Oregonese?) woman Jen Moss is pissed because people just don’t understand her need to bicycle around topless and are prohibiting her from riding in the Fourth of July parade. According to the AP, Moss is known for riding her bike “free and independent of all clothing but a hemp G-string”. In fact, she’s known as “The Naked Lady”.

I get the naked part (let the girls get some air), but the hemp G-string sounds questionable at best. You know, back in the day aka 8th grade, I was quite good at making hemp necklaces with cool beads and whatnot. I gave them as gifts to my friends. Maybe now since our tastes have matured, I can make them all hemp G-strings with cute little beads! AHHH! But back to business.

The Ashland Chamber of Commerce is in a battle right now over this. In Moss’ application she said she wants to lead a group of rollerbladers in her hemp booty floss, “blowing a conch shell.” Blowing what wearing what? Errr… Whatev, she sounds like an inspirational leader (those rollerbladers are bound to follow her, along with every creepy man within 50 miles) and America is all about leadership!

Clearly she is a great patriot and loves America. Come on people, it’s the Fourth of July. It’s not like your children haven’t seen boobs before. Let Jen parade!