Oh dear God, take a look at this. According to a Billboard article (and last night’s episode of “I’m a Celebrity…Get Me Out of Here!”), the male half of the media whore team known as Speidi just came out with a rap single. Yeah. The video is worse than you imagined:

In the Billboard article, Spencer waxes eloquent about his rap skillz, and on the fact that he is like totally the best white rapper ever:

“Honestly, I used to be the biggest Eminem fan on the planet, but the difference now is that he’s so paid. My hustle is the same as his was when he was 25, coming out with his first flow.” And he continues his harsh criticism of [Asher] Roth, whom he recently referred to as a “nerd” in an interview with MTV News. “I want to be the antithesis to Roth,” explains Pratt. “If he’s the good guy right now, I’ll be the villain. I’m more hated than Eminem ever was, so why can’t I be the hated rapper?”

Spencer, I don’t think you’ve ever had “hustle”. And “so paid”? Okay, Kanye West. (I obviously had to look that up…but I understand that “Gold Digger” line now!)

Spencer Pratt, please go away. Take your wife with you. WE DO NOT CARE.

P.S. If you insist on staying around, at least make your wife dye her hair a normal human color.

the hills returns! don’t judge me.

So I make fun of it all the time, but let me just say I feel as excited as this girl when she gets to sit next to steamy oh so dreamy Joe Jonas. Rawr. (I am OBSESSED with this picture, by the way. Haha.)

THE HILLS IS BACK, YA’LL! Why do I love this show? I really can’t explain it. Perhaps it sends me subliminal messages to make me think I am just as hot as they are or that my life is just as exciting…I don’t know. For the record, my life IS that exciting…right… But the fact remains that I follow their lives like it’s my job. And it’s pathetic. Moving on.

On this season premiere episode, we see just how boring Lo is and how badass Audrina can be. (“We will never be friends” SNNNNNAP! Five points to Gryffindor and Audrina!) Lo left Audrina’s birthday party at her own house to play with her dog upstairs for an hour. UM HELLO. There was a guy with a hot pink mohawk there–the party couldn’t have been that dull. Pink mohawks AND a pool. Why is that not my life?! WHY NOT MEEEEEE. I wonder if dye runs into the water when he swims. And poor Lauren, that girl is trying to hold it all together behind her bug-eyed sunglasses. I’m totally on team Lauren. But you won’t catch me dead or alive in a t-shirt that says so. They make t-shirts that say that and people buy them. I’m not making that up.

Justin Bobby is back in all of his creeptastic glory, and I must admit, he is weirdly sexy. Sexy ugly, perhaps. He’s the kind of guy that I would go out on one strained date with just so he could show me all the trendy L.A. jazz clubs or something weird like that, and then never answer his calls again but go to those clubs with my girlfriends from then on. Make sense?

Spencer, teevee’s least liked villain, is like the Debbie Downer of LIFE and not surprisingly still sucks. Heidi is still dumb, and has a marginally smarter sister on the show now too. Yippee, another cast member’s sibling trying to get airtime (cough Stephanie Pratt cough). If you missed this amazing 24 minutes of television goodness, have no fear–if it were possible MTV would put extra hours in the day just so they could replay the episode even more than they already are going to.

What happened to Heidi? That girl gets trashier looking every time we blink. Here is Heidi pre-rhinoplasty and boob job:

She was so pretty! But then she got kind of popular in her own right (add her to the list of celebrities that are famous for no reason) and went on this feminist rant of how she feels better about herself now that she got her nose and ta-tas done because people used to make fun of her. Heidi, people weren’t making fun of you because you had a big nose, they were making fun of you because you’re a RAGING IDIOT. But she wanted to look like L.A. Barbie. 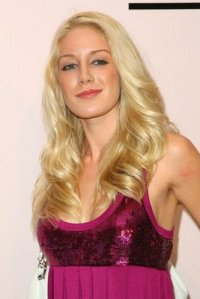 Here is a reason why I am on team Lauren. Lauren looked like L.A. Barbie when The Hills started (a.k.a she was 19 and trying to be hot) and has since matured and looks more natural. Classy, even.

I told you I care too much. MTV you slay me.

Being that this is my first post of the day, I was going to say good morning, but it’s lunch time now. So I hope you had a good morning and a yummy lunch.

Okay, that’s all I got…for now. Stay busy at work, fools! I will continue to blog.