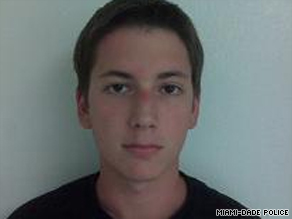 He looks normal, but he's sick.

The cats of Miami can peacefully take cat naps again, now that 18-year-old cat killer suspect Tyler Haines Weinman has been caught.  Weinman was arrested and charged for the 19 serial cat killings that have been plaguing the area.  What’s even worse is that the cats were mutilated as well.  There have been 34 cat deaths in the area, but police were only allowed to connect 19 to serial killings.  They are looking into the matter to see if there are accomplices.

I don’t even understand how a human being can do something like this.  Remember Joseph Petcka? Well I think Tyler Haines Weinman has done more than enough to  join him in the ranks of huge jerkfaces.  According to the story on CNN,  if he gets convicted on all counts, Weinman could face up to 158 years in state prison.  Think that’s a little harsh?  I don’t.  And we all know he won’t end up serving the full term anyway.

“The cruelty of these crimes were horrific for the animal victims, but there were many human victims as well,” Mayor Paul Vrooman said.

“Let’s not forget the children and the families who found their pets mutilated. These awful scenes inflicted a human toll.”

I’m glad this monster has been caught.

Cat people are SO WEIRD.  But let’s face it, sometimes really weird can be funny.  Happy Friday/start of a three day weekend, y’all!

hate cats, but this is adorable.

Well, I guess they are kittens, not cats.  THERE IS A DIFFERENCE.  Anyway, I was shown this video over the weekend and I’ve been dying to post it.  (Weekend away=no blogging).  “Kittens inspired by kittens” is a masterpiece!  Enjoy!

Sooooo my landlord said I couldn’t have a cat or dog…but he didn’t say anything about chameleons!  HOW DOES IT DO THAT?  (And here is where I answer my own question so that you don’t have to take the time to Google it yourself…click the link)  I also would like to have multiple pairs of Ray-Bans.

Oh and guess what song is stuck in my head now?

Extreme sheepherding…is it a sport?  Is this even real!?  I love this sort of tomfoolery!  Happy Monday, work force!

quirky news for a sunday afternoon.

These toilets look a little fishy.