john oliver needs his own show. 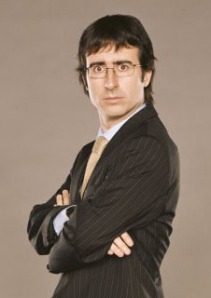 The following video brings together two of my favorite things:  John Oliver and ripping apart Sarah Palin. For more Palin-bashing fun, please refer to Kathleen and Mallory’s thoughts on the subject.

Kathleen and I are currently sitting next to each other on my couch, wearing matching J.Crew yoga pants, typing on our matching elitist white MacBooks, with our matching jaunty ponytails, watching The Daily Show and playing on the Internets. Could we BE any more DC right now? Or any more liberal? Or any more elitist? Maybe, but only if there was a life-size cutout of Barry sitting between us, wrapped in a down comforter.

delightfully hypocritical video for your weekend.

Courtesy of our AC, our New England correspondent, please check out this wonderful clip from The Daily Show. Jon Stewart 2016!

As much as I want to, I can’t really hate Sarah Palin–oh don’t get me wrong–this has nothing to do with the bonds of sisterhood. I absolutely ABHOR her positions on, well, everything.  And her early 90s mall girl bangs. But she is so much fun to write about and make fun of that I can’t help but be slightly appreciative of her very existence.  And I’m not alone.  It’s like John McCain took his happy pills and threw us all a softball.  And leave it up to All-Star Jon Stewart to hit it out of the park.  Jon Stewart, you are my hero.

So watch this clip with Jon and Samantha Bee, a self described “Vagina-American” (HAHA!), as she oh-so-sarcastically talks about why she’ll vote for McCain.  You will for sure pick up some new anatomical terminology as well.  (I’m talking about lady parts.  Teehee.)

And here is some more Daily Show goodness, brought to my attention by Alicia, our South Korea correspondent.  What a warm/appropriate welcome for the RNCers!

Instead of, I don’t know, talking about the issues, our friend Johnny McCain has stooped to a new low–and purely out of jealousy. He newest campaign ad compares Barack to Britney and Paris. And John, I know it sucks to not be the most popular kid in school–but the reason Barack is so popular is not because he parties a lot and is famous for no reason other than being rich, or is a talented singer/dancer but a tragic trainwreck (sorry, Britty) that people just can’t stop caring about.

It’s because he’s on to something really special. Something that you, John, can’t deliver. And people want change. One last thing, he was the editor of the Harvard Law Review and used to teach Constitutional law. He’s not dumb. I, in no way, am inferring that Paris and Britney are dumb. And I’m SURE that wasn’t McCain’s intent either. Right?

And this just in! The Hilton family donated the maximum amount possible to McCain’s campaign! Haha OUCH. So they’re probably not happy that he compared Barack to Paris in a negative light… Thanks to Jon Stewart for doing that research for me! Watching Jon Stewart and blogging at the same time is divine. You should try it sometime. I can only hope Jon’s (not the John previously mentioned) wit will rub off on me. Mmm, a girl can dream.

Here is the ridiculously dumb, immature and ineffective campaign ad:

And here is what Saint B had to say about it:

“Given the seriousness of the issues, you’d think we could have a serious debate. But so far, all we’ve been hearing about is Paris Hilton and Britney Spears. I mean, I do have to ask my opponent, is that the best you can come up with? Is that really what this election is about? Is that what is worthy of the American people?”

Well done, Mr. Obama. You are a gentleman and a scholar. Now go kick McCain’s ass.